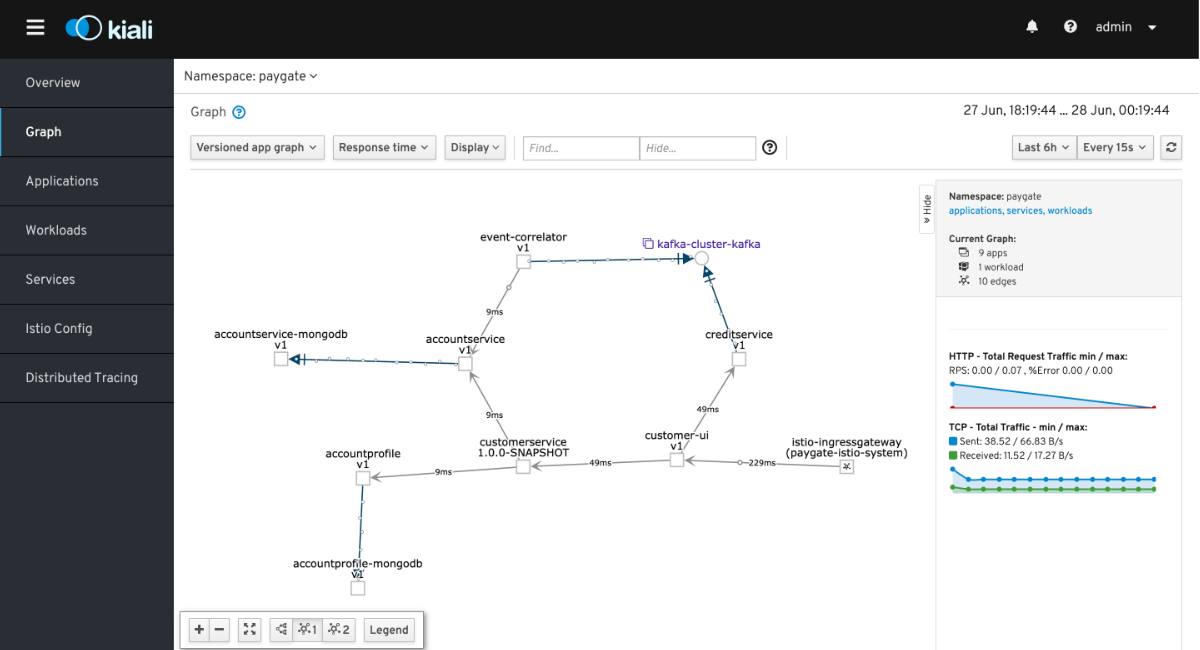 This article is part of series of articles based on the Payment Gateway use case.

For all the other articles regarding Payment Gateway use case, please refer to the References section at the bottom of this article.

Refers to the GitHub for how to deploy the complete demo.

Based on the open source Istio project, Red Hat OpenShift Service Mesh adds a transparent layer on existing distributed applications without requiring any changes to the service code. You add Red Hat OpenShift Service Mesh support to services by deploying a special sidecar proxy throughout your environment that intercepts all network communication between microservices. You configure and manage the service mesh using the control plane features.

Good thing about using Red Hat ServiceMesh is I do not need to make any source code change to my current microservice applications. However, I am seeing the direction to use Deployment instead of DeploymentConfig. So I decided to take this chance to convert all my yaml files content to use Deployment, as it is considered a first class citizen now both in OpenShift and Kubernetes. I also need to modify the existing yaml files content to turn on support/features for ServiceMesh. That’s the only changes I need to make in order to enable my Payment Gateway microservice applications for ServiceMesh.

I also make some changes to the existing yaml files to ensure they follow the Istio requirements.

According to the OpenShift documentation, some of the features in DeploymentConfig are not available in Deployment such as triggers, deployment strategy syntax and etc.

Let’s review the changes made by using the template/accountprofile-template.yaml as an example.

Change the .spec.selector to the following syntax:

There is no change require for the deployment strategy for MongoDB since the syntax for Recreate strategy is the same for both. But if you are using Rolling Update strategy, you will need to change the .spec.strategy.type from Rolling to RollingUpdate in Deployment.

Remove any other syntax that are not part of Deployment if there is any.

Again, let’s use the template/accountprofile-template.yaml as an example.

The Deployment section is updated with the following syntax.

sidecar.istio.io/inject: “true” is used to indicate that we would like Istio to inject the sidecar for this deployment. On top of that, I also added version label. This is a required label for us to configure Istio policy later. For example this will be used for the DestinationRule in Istio configuration.

For the above configuration, notice I also added pgw-istio: ‘true’. I will come to this in the later part of this article.

Make sure your service section looks like the following. Ensure the .spec.selector matching the Deployment section. The .spec.ports[0].name using the predefined name from this list in order for Istio to provide additional capabilities, such as routing and rich metrics. If there are multiple ports with the same protocol, <protocol><-prefix> naming convention can be used.

Verify the following in the Deployment section for .spec.template.spec.container[0].env. Make sure all the ports configured at the following sections are matching the service section above if you would like to properly expose the ports.

Another change that I have made to Payment Gateway yaml files is to remove the BuildConfig because Deployment does not support –allow-missing-imagestream-tags=true parameter at oc new-app command line. Deployment expects the container image is available in OpenShift before oc new-app command is called. So instead of using BuildConfig, I change to use oc new-build as per the following example.

Typical way to deploy Red Hat Fuse service is to run the following command to build and deploy the Camel service to OpenShift. This approach deploys Camel service using DeploymentConfig.

But this is not suitable for ServiceMesh which we need to use Deployment. So I had created the OpenShift template in yaml format. Use the following command to first build and create the imagestream in OpenShift.

Then, run the following command to create the Deployment.

Once you have the above Operators installed, proceed to install the ServiceMesh Operator from OpenShift OperatorHub. Refer this documentation for the details.

The operator also install and preconfigured Prometheus and Grafana at the same time.

The following shows the installed Operators in the application OpenShift project.

I am installing an all-in-one ServiceMesh control plane. You may customise the installation following this guide. The following shows the yaml content.

You may change ior_enabled to true if you would like OpenShift to auto create the OpenShift Routes for all the host names listed in the Istio Gateway config file. Refer Automatic Route Creation for more detail.

You may also use the OpenShift console to install the ServiceMesh control plane into your chosen OpenShift project as per the following screen shot.

The are few major differences between community Istio comparing to Red Hat ServiceMesh. One of the differences is that ServiceMesh does not auto inject sidecar to the PODs when the project is added as ServiceMesh member. Instead you need to explicitly annotate the Deployment to include sidecar.istio.io/inject: “true” at .spec.template.metadata.annotations. This has been covered in the earlier Yaml files changes.

The above implicit sidecar injection annotation allows us to decide which PODs should be a member of ServiceMesh, which added much flexibility and control for ServiceMesh deployment.

The following shows the yaml content for adding the ServiceMesh Member Roll. In this example, the member is paygate OpenShift Project.

Run the following command to add the Member Roll.

Note that if you have configure ior_enabled: true to enable Automatic Route Creation in the ServiceMesh control plane installation, you does need to manually create the route here, OpenShift will auto create the route for you whenever you create the Istio Gateway.

This route must be create in the Istio Control Plane Openshift project. In this example the control plane project is named as paygate-istio-system.

Note that we are using the default istio-ingressgateway.

The following shows the istio-ingressgateway service. Notice the http2 is the non-secure port that we wish to use to route the traffic for customer-ui.

Run the following command to create the OpenShift route.

The following shows the created OpenShift route for customer-ui.

The customer-ui should be secured with Red Hat Single Sign-on (RHSSO), we will need to change the RHSSO client to point to the new route created in the previous section.

Istio Gateway describes a load balancer operating at the edge of the mesh receiving incoming or outgoing HTTP/TCP connections. The specification describes a set of ports that should be exposed, the type of protocol to use, SNI configuration for the load balancer, etc.

Istio Destination defines policies that apply to traffic intended for a service after routing has occurred. These rules specify configuration for load balancing, connection pool size from the sidecar, and outlier detection settings to detect and evict unhealthy hosts from the load balancing pool.

Use the following yaml content to create the Gateway, Virtual Service and DestinationRule. Note that this is a simple example of routing policies and rules. You can create more complex rules and routing policies using Istio.

The following shows the Gateway configuration.

The following shows the DestinationRule configuration. Note the version label value (v1) is matching the value we had set in the Deployment configuration. There are a lot more routing rules you can apply here, refer DestionationRule for more detail.

You can put these configuration into one single yaml file and run the following command to create them. These have to be created in the application OpenShift project, in this example is paygate.

If you have some services inside the ServiceMesh member project that need to be accessed outside of ServiceMesh which they are considered as non-ServiceMesh components. We will not create the ServiceMesh specific routes for this case. You will need to modify the OpenShift Network Policy to bypass those services.

Perform the following to update the network policy in the application OpenShift project.

Remember in the earlier section, the Deployment in the yaml file with additional label of pgw-istio under .spec.template.metadata.labels. With the above network policy change, we indicates we would like the network policy to be applied on those PODS with pgw-istio set to true.

You can also use the OpenShift admin console to make the changes.

Perform a few credit transfer transactions using the customer-ui to create some traffics. Go to Kiali to view the metrics captured by ServiceMesh.

Note: Refer GitHub for how to access the customer-ui.

The following shows the applications under ServiceMesh. Note that Kiali indicates alertmanager is missing sidecar, this is intentional because we did not annotate the alertmanager to inject sidecar. This is non-ServiceMesh component. Same applies to Prometheus and Grafana.

It is also crucial to enable liveness probe for all the PODs so that ServiceMesh is able to validate the PODs health as shown on the screen.

The following shows the services in ServiceMesh. Note the Ports section is indicated with green tick icon. If the naming convention is not correct for the POD service, it will shows a red icon to indicate an error.

The Red Hat ServiceMesh installation also pre-integrated the Jaeger UI on Kiali which you can see from the following screen.

You can also access to Jaeger on it’s own console.

The following shows the customer-ui Gateway, Virtual Service and DestinationRule.

Running ServiceMesh or Istio on OpenShift is pretty easy as long as you understand the differences between upstream community Istio and Red Hat ServiceMesh. With the enhancements tweak for OpenShift it makes managing and running microservice applications on Istio peanut easy both for administrators and developers.