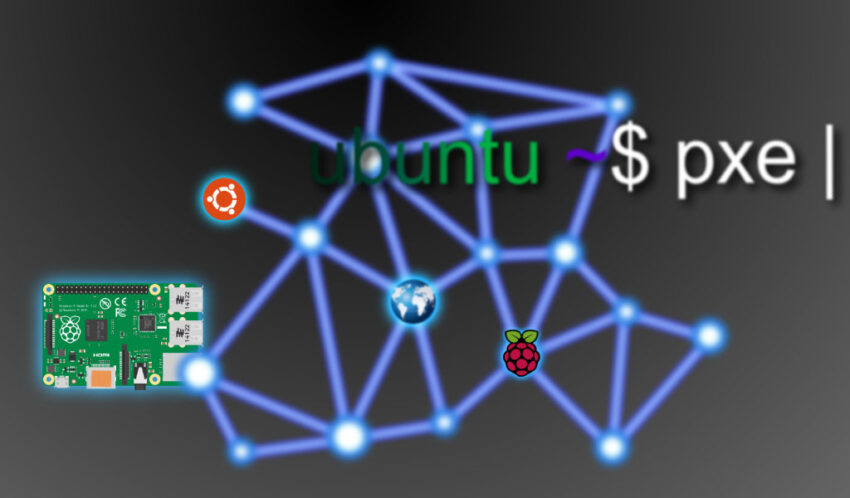 Running Raspberry Pi 4 with SD card (a good fast SD card) is fine, if speed and resiliency is not a concern. SD cards always have speed limitation and there are chances SD card maybe corrupted during incidents such as power interruption. I am going to use this to host my websites and data. For this, I need a better solution with proper storage backup for the OS, binaries and data. The best is the solution can provide reusable golden base OS image to deploy multiple Kubernetes nodes. This is where I am looking at PXE boot Raspberry Pi 4 from my Synology storage server.

I am using Ubuntu OS for my Raspberry Pi here. You can refer to the Part 1 for the reason of why I choose Ubuntu.

Note: You can also boot your RPi 4 from USB drive which provides better performance on disk IO. You can find out how to do this from this great post – I’m booting my Raspberry Pi 4 from a USB SSD by Jeff Curling.

What is PXE boot?

The person that can explain this better is no other than Wikipedia. The Preboot eXecution Environment, PXE (most often pronounced as /ˈpɪksiː/ pixie, often called PXE Boot/pixie boot.) specification describes a standardized client–server environment that boots a software assembly, retrieved from a network, on PXE-enabled clients.

On the client side it requires only a PXE-capable network interface controller (NIC), and uses a small set of industry-standard network protocols such as DHCP and TFTP.

In short, you can boot your Raspberry Pi OS remotely over network from a central server that is configured to support PXE booting.

You need to install Raspberry Pi OS and configure the PXE boot using the OS. You can then proceed to re-install the Ubuntu OS on your RPi 4. I have not found a simple way to configure PXE boot on Ubuntu OS directly at the moment. Please let me know if you aware of how to do this.

I will not be covering the Raspberry Pi OS installation here. This can be easily done with Raspberry Pi Imager.

Once you have the Raspberry Pi OS install on the SD Card, proceed to boot it and ssh into the OS. Do the following command to update the OS and install the rpi-eeprom.

Run the following command to get the latest installed EEPROM and make a copy in your local directory inside the RPi 4.

Create a EEPROM configuration with the following command. In here it is named as bootconf.txt. The only configuration that you need to change is the TFTP_IP. This is your server where the RPi 4 will be booting from. We will cover this TFTP server configuration setup in the next section.

Let’s execute the following command to find out the RPi serial number. Take down this serial number. We will need to use it for our PXE boot folder at the TFTP server site.

You can now try to reboot the RPi 4 with the SD card unplugged. Connect a monitor to the RPi 4 while you are doing this. If you see messages that RPi 4 is trying to network boot from the configured TFTP IP address, means the configuration is working. The boot will fail at this stage because we have not completed the server site configurations.

In here, I am using my existing Synology storage server for the NFS share required for the PXE boot and the necessary TFTP server configuration.

You can refer the following for the configurations that I had done. You can just apply the same configurations and permissions for both the share folders or tweak them to your preferences.

Synology storage server includes the DHCP server which also includes the TFTP server that you can configure easily for this PXE boot purpose. The following are the configurations that I have done.

In my case I am going to use this subnet IP addresses for my Raspberry Pi nodes. I am using the Synology as my home DNS server, so the Primary DNS is configured to the Synology IP address. In your case, you should configure this to your existing DNS server.

In the Vendor screen, create a new vendor settings with 43 for Raspberry Pi Boot values.

In the PXE screen, click on the checkbox to enable PXE and select the Local TFTP Server option. You can ignore the Boot Loader value. We do not need to place bootcode.bin in the rpi-tftpboot root directory. The PXE will lookup for the bootcode.bin from each of the folder that we will create named after the RPi serial number later on.

Once you have booted up the Ubuntu, ssh into the server to copy the /boot folder onto the NFS share drive we created earlier.

Note: Booting Ubuntu on RPi 4 requires patient. It will take some time for the system to boot completely and ready because of the cloud-init. You really need to wait until it is fully completed as per described here.

ssh into the Ubuntu and install the nfs-common to allow us to mount to the NFS shared folder using NFS client.

At the storage server side, we need to create a sub-directory in the NFS share drive for the specific Raspberry Pi node. We will create a folder name after the RPi 4 serial number under the rpi-tftpboot share drive.

At the end of the day, we will have multiple folders with each corresponding serial numbers at the rpi-tftpboot shared driver.

For example if the serial number for the specific Raspberry Pi is b153d618. We will then create the folder and mount the NFS shared drive on the local Ubuntu SD card and start copying the /boot directory to the directory named b153d618.

Touch Up Some of The Files on the NFS Share Drive

Because of the way how Ubuntu boot loading is different from Raspberry Pi OS, we need to adjust a little bit on the boot loading files in the shared drive we had just created. You can run the following command inside the /media/bootdirectory.

We also need to uncompress the vmlinuz kernel file.

Modify the config.txt with the following changes. Make sure the kernel value is configured with the correct name and version number from the above.

Change the cmdline.txt with the following details. Note the rpi-pxe/kube1 shared folder, this will be the shared folder that we are going to create in the next step.

We need to create a folder named kube1 in the NFS share folder rpi-pxe. This could be any name that make sense for you, it does not have to be kube1 as in my case. Make sure this folder name is the same as configured in cmdline.txt above.

Update the fstab file in the share folder just copied over for kube1.

Note: I think the entry for <storage server ip>:/volume1/rpi-pxe/kube1 is not required in the fstab since we have already define this in the cmdline.txt earlier.

At this moment, it is best that you have monitor connected to the Raspberry Pi so that you will be able to know what is going on with the booting process. This also give your visibility of what is the error message on screen is something is not right.

Once everything is fine. You can repeat the same process for all the other Raspberry Pi nodes that you intended to boot from network drive.

I basically just make a copy of the first node for each folder under rpi-pxe and rpi-tftpboot. I use that as a golden copy for all the sub-sequence nodes configuration.

Bumps to Watch Out

Mistake happens. Some tips to make sure you would not repeat the mistakes that I have gone through.